Fans of the Harry Potter saga are thrilled. Have you heard about the Harry Potter Tour at the Warner Bros. Studio in London? The tour is very popular, so if you intend to visit, here is a list of top tips to get you ready for the world-famous attraction!

1. Show your geek side

There will be no problem posing as a geek on the Harry Potter Studios tour - everyone is! From enthusiastic staff who know the stories inside out to groups of children who come dressed as their favourite characters (including Hermione, Ron, Hagrid and even the occasional Dobby fan wearing nothing but a big pillowcase), you are sure to be in the company of people with similar passions.

2. Relive the celebrations, duels and howls of the Great Hall

After a short welcome film by Daniel Radcliffe, Emma Watson and Rupert Grint in the luxury cinema, visitors will be welcomed to Hogwarts' Castle and its enchanting grand hall!

The film is totally true to reality - the front doors really are huge. When Harry entered the Great Hall at the start of the first film, it was actually the first time Daniel Radcliffe saw the set, so the look of wonder and amazement on his face was authentic!

Once inside, fans will notice that the decor of many famous Hogwarts scenes has remained completely intact, although more discerning visitors will notice that the ceiling is not enchanted in real life. Your tour guide will not hesitate to point out that the ceiling has been finished with CGI special effects! Beyond the fascinating details of all the elements of the setting, Professor Dumbledore takes centre stage, surrounded by Hogwarts’ other teachers and staff. Be sure to check out the sorting hat, used to organise new students at Hogwarts' annual early term feast. Which house would you expect to be placed in if it was your first day?

Have you ever wanted to be a Quidditch champion? There are fifteen golden snitches hidden in the studios. The tour guides will help you with the first one when you leave the Great Hall, but can you find the other fourteen?

You can't call yourself a real fan if you don't fly a magic broomstick. Don't miss your chance to get on board your own Nimbus 2000 or Firebolt. Using the same "green screen" technology used by the studio to make the Harry Potter films, those who are adventurous enough will be flown over the Hogwarts Express, the Thames and the streets of London. Photos of your flight are also available for purchase.

5. The Museum of the protagonists' magic wands

Even more essential than a broomstick in the daily life of a witch or wizard is, of course, a wand! The guided tour at the Warner Bros. Harry Potter Studio features beautiful wand exhibits from all the main characters. Look out for Lord Voldemort’s wand amongst the bunch!

The wands are just one of hundreds of details that will captivate you throughout the visit. Guests can approach and witness the meticulous details of the props and photographs of the films, including handwritten letters, old copies of the Daily Prophet, and details of the different animal actors. Be amazed by the graphic design of all the sweets and treats from Honeydukes’ and Weasley's Wizard Wheezes. 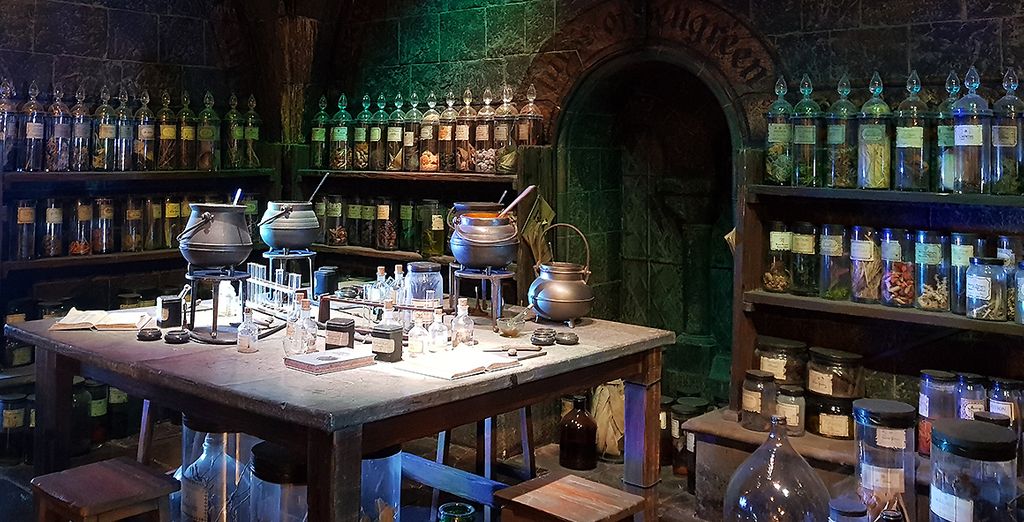 There is only one place to go when it is time to get a wand of your own. That place is of course Ollivanders! You may see several that you like, but don't forget that you don't choose your wand - it will choose you!

If you want to practice your wizard skills, follow the cries of "Locomotor" on the set of the Weasley's fascinating house. Using a laser wand, apprentices can get an iron to de-crease clothes, kitchen knives to magically chop vegetables and knitting needles to make the latest Weasley creation. Unless you are a fan of household chores, it will be hard to resist the urge to try to bring the wand home.

If you are dreaming of Mrs. Glossy's Silver Polish and Mrs. Scower's All-Purpose Magical Mess Remover, like Hogwarts’ keeper Argus Filch, you might want to stop by the potion lab. Wait long enough, and you may need to mix a little Calming Draught when you see the mixers come to life before your very eyes!

Stop by the huge three-storey Knight Bus and enjoy a Hogsmeade-style refreshment with a glass of delicious butterbeer. Served in decorative containers that you can keep as a souvenir, you will certainly want to savour this sweet taste of caramel.

Unlike creamy and appetising butter beer, Every Flavour Beans contain flavours that you certainly won't want to enjoy. Choose from black pepper, earwax, soap, rotten egg and even vomit. Use at your own risk! Available at the gift shop, Every Flavour Beans are just one of the hundreds of items available in this Harry Potter fan paradise, along with replicas of wands, dresses, bags, puzzles, clothes, scarves, badges and more. Make sure you have made a Gringotts withdrawal before you stop by!

London boasts some of the most prestigious, unique and eccentric shops in the world. However, nowhere else in the city is there a shopping paradise for witches and wizard - welcome to Diagon Alley! From the animated giant, Weasley's Wizard Wheezes, to the discreet but intriguing exterior of Ollivander's wand shop, there's no better place to spend your Knuts, Sickles and Galleons. 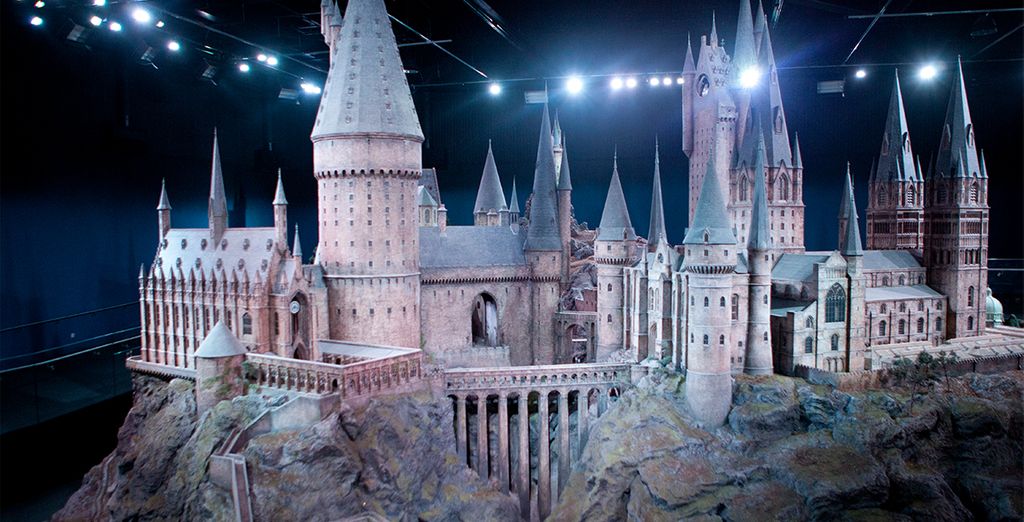 If all of this wasn’t enough, the tour may actually save the best for last, with the fantastic Hogwarts model. Rightly described as the "crown jewel of the art department", the 1:24 scale model was built by a team of 86 artists and team members - if it had been built by one person, it would have taken over 74 years! The path that gradually descends around the model allows visitors to appreciate its breath-taking detail and see how the model was staged for the screen.

Do you want to go to Hogwarts? The Practical Questions

How to get there?

The Warner Bros. Studio Tour is located 20 miles northwest of London and less than 3 miles from the M1 and M25 highways.

Regular shuttles, operated by Mullany's Coaches, connect Watford Junction to the Studio Tour with a travel time of approximately 15 minutes. Buses run every 20 minutes from 9:20 am (with additional services available from 8:15 am when the first visit is at 9 am). Please note that the last shuttle back to Watford Junction will leave the studio circuit at the end of the circuit. For more information on this subject, please consult the opening hours calendar.

Please note that this is a cash only service. Credit and debit cards are not accepted. You will need a valid Studio Tour ticket or reservation confirmation for the travel date to use this service. Have this handy to show to the driver when boarding.

The nearest railway station to the Studio Tour is Watford Junction and trains arrive from London Euston (20 minutes) and Birmingham New Street (1 hour).

Parking is free in the parking lot directly outside the Studio Tour. Some disabled parking spaces are available near the main entrance. When you enter the parking lot, make sure you have your reservation confirmation ready to be shown to the parking attendants.

Want to project yourself into the magical world of Hogwarts? Here is the map of the Park with the main attractions

Where to buy tickets?

The best way is to visit the official website: https://www.wbstudiotour.co.uk/tickets

Where to sleep near the Park?

Many hotels are available near this theme park, but I recommend the following:

Schedules differ according to the season but generally the park is open from 8:30 am to 10 pm - for more details take a look at the schedule of openings for the year below. If you are looking for dates for next year, the periods are similar and should not differ much.

These places are very different: one is in a theme park; the other is a studio tour, but there are many similarities between them. Which one is most worth visiting? Both offer scenery, fun activities for Muggles and butterbeer. The memories you will find in these two places are equally brilliant, so you will not miss out if you decide to go to one place rather than the other.

At the Wizarding World of Harry Potter at Universal Studios Orlando, none of the props are the real deal, but Universal has done an incredible job with its know-how and attention to detail. Add to that the live shows, the charming boutiques, the fabulous attractions and an unforgettable visit to the Three Broomsticks, and you’ll live the experience of a lifetime!