The Best Time to Visit Rome

When is the best time of year to visit Rome?

Located in the central-western portion of the Italian Peninsula, the glorious Eternal City is a popular tourist destination all year round. It boasts spectacular examples of various architectural styles – thanks to its impressive history, which spans 28 centuries. Rome is also home to the Vatican City, the world’s smallest country and the home of the Pope, the leader of the Roman Catholic church.

Climate and seasons in Rome

Rome has a Mediterranean climate, meaning that summers are short, hot and dry (although humid), and winters are long, cooler and wet. Throughout the year, temperatures range, on average, from 3°C to 31°C, rarely dropping below -2°C or above 35°C. The peak season occurs during the summer months of July and August. But this means that during the rest of the year, you will have plenty of opportunities to enjoy the splendour of Rome without throngs of tourists.

The best time of year to visit Rome

Being a European city, Rome experiences all four seasons. Summer tends to be the busiest time of year for tourists, but activities, restaurants and hotels remain open throughout the year. If you want to skip the busyness of the tourist season, then we’d recommend spring or autumn, so you can still make the most of the warmer weather.

The shoulder months of May and September offer the benefit of warmer, drier weather without the hustle and bustle of tourists. So, while there are unlikely to be special offers available, you’ll probably be able to find a spot in your favourite hotel. It is also a great time of year to visit the following attractions when the queues are likely to be a lot shorter: 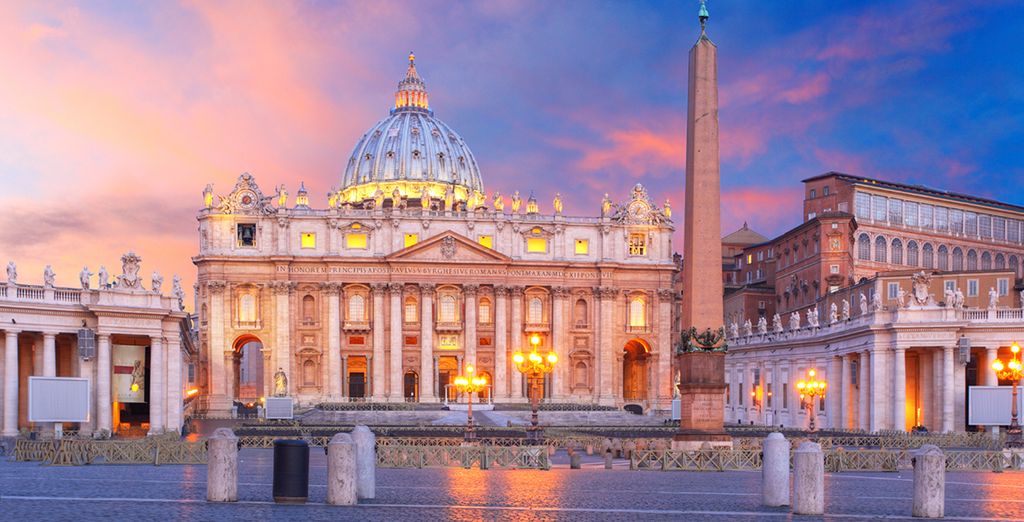 The Pantheon, one of the most famous sights in Rome, is a must-see at any time of year. This monument boasts many records, including being the best-preserved example of Roman architecture and having the biggest brick dome in history. In addition, it is considered by many to be the forerunner of modern places of worship. Construction started between 25 BC and 27 BC by the consul Agrippa, although it was heavily restructured in the following millennia. And, just so you are in the know, the word ‘Pantheon’ is Greek for ‘honour all Gods’, as this magnificent building was built as a temple to all Ancient Roman gods.

The Roman Forum is a rectangular structure surrounded by the ruins of ancient government buildings. Originally built as a central location for daily life in Ancient Rome, its oldest shrines and temples date back to the 7th century BC. It was once the location of public trials, speeches and gladiatorial matches. But today, this impressive example of Roman architecture is a popular destination for tourists and is likely to be quieter in the shoulder months.

The summer tends to be the busiest time of year for tourists in Rome. The climate is usually hot and dry, with average temperatures ranging from 19°C to 31°C. However, some people may find the humidity uncomfortable. Due to its popularity, it is worth booking accommodation up to six months in advance. It is also a great time of year for getting off the beaten tourist track and enjoying the lesser-known delights that Rome has to offer.

One of Rome's hidden gems, the Zuccari Palace is an example of some unusual architecture. Situated on Via Gregoriana, near the Spanish Steps, it was designed by a pair of Baroque artists and brothers – Taddeo and Frederico Zuccari. Inspired by the ‘monster park’ in Bomarzo, not far from Rome, the brothers decided to include architectural creatures with gaping mouths to form the doors and windows. Unsurprisingly, it is nicknamed ‘The Monster House’, and it has got to be one of the quirkiest attractions in Rome.

The water clock in the Villa Borghese

The Villa Borghese, a landscaped garden surrounded by attractions, certainly draws the crowds. But you may not have heard about its most fascinating feature. The water clock tells the time correctly, using the force of the water that flows beneath it to move the pendulum and wind the clock. It is a real feat of mechanical ingenuity.

Winter tends to be a less popular time to visit Rome, as the weather is colder and the days are shorter (at its shortest, the sun sets at 4.30 pm). Nonetheless, if you do not mind donning an extra layer, October to April can be a great time to visit this city. With the exceptions of Christmas and Easter, room prices are usually lower, and the city is quieter. In winter, temperatures tend to range from 3°C to 16°C, so it can be a perfect time to make the most of some of Rome’s indoor activities and restaurants.

Castel Sant’Angelo, also known as the Mausoleum of Hadrian, is a museum on the right bank of the Tiber river. During the winter months, it is home to one of the city’s most visited public ice rinks. We can think of nothing more magical than wrapping up warm and skating on the ice.

The indoor market in Testaccio

This popular food market started life as an open-air market in Piazza Testaccio but was covered and redesigned in 2012. Most stalls here have been run by the same families for generations, and you will marvel at the range of cheese, fish, fruit and vegetables that is on offer.

What to bring to Rome?

This, of course, will depend on the time of year you are visiting. Some essentials include:

We recommend visiting Rome during the shoulder months to avoid the crowds, while still enjoying some of the warmer weather. However, if you do not mind putting on an extra layer and want a good deal, winter is a perfect time to plan your visit.